encouragement. the word that sustains the weary. 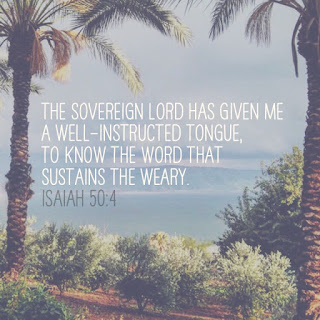 “The Sovereign Lord has given me a well-instructed tongue, to know the word that sustains the weary.” Isaiah 50:4

This word has been rocking my world this week. Impressing on my heart that as person who follows Jesus, especially one who gets to do ministry professionally, this is my calling and prayer: to have a well-instructed tongue that speaks words to sustain the weary.

What a beautiful thought. And I think quickly, then, how often my tongue is a poor student, inattentive and careless. Heckling and heaping onto the weary more than sustaining them. How quickly we take the role of world critic and our words follow suit.

Encouragement has been heavy on my heart recently. Scripture has a lot to say about encouragement and names it as a significant purpose for our words. One of the main themes of Paul's letter to the Ephesians is urging the Body to encourage one another. To give others the strength to carry on for another day in a world that wears and beats down. To rebuild one another with love and truth that we wouldn’t wither under the hailstorm of lies, hits, and disappointments the world rains on us. I can think of a few people in my life whose conversations feel like a storm shelter. I leave lighter and more rested than before; a little more whole and bold to face the stuff of life. What a gift.

I think this is what Paul is writing about in Ephesians 4:29, “Don’t use foul or abusive language. Let everything you say be good and helpful, so that your words will be an encouragement to those who hear them.”

Or Proverbs 16:24, "Gracious words are a honeycomb, sweet to the soul and healing to the bones."

These verses can be equal parts of convicting and empowering for me. Is my tongue being well-instructed and tamed? Is what I’m saying helpful, necessary, healing? Am I adding to someone’s insecurity or assuring them they are enough and loved despite their weaknesses?

Ultimately, am I person that’s created a place safe enough for people to share their insecurities because they trust I’ll join them in the battle of protecting what’s vulnerable?

Or do I tell people through what I say and how I say it that I will be eager to put on my critic hat at the first sign of messiness, mistakes, weird quirks, or totally uncool dance moves?

I truly believe one of the most important parts of my job of working with college students is helping them believe they’re awesome. Speaking it as often as possible to a weary, uncertain, awkward, shaky, powerful, and inspiring group of people. Fearfully and wonderfully made. Knit together well and on purpose. Not made to be afraid or insecure, but open, brave, and secure; dorky hobbies, weird dance moves, and all. You’re incredible and endearing. You should know it. I should tell you. We should tell each other.

At the end of the day, when I reflect on what the past hours have held, I’ve lately asked, “have you done more building or demo today?” Have you found more flaw than art in those who bear God’s image around you? Or have you simply left a masterpiece ignored and unaddressed?

I’m not suggesting you just run up and down the sidewalks screaming compliments or telling strangers you think they’re awesome, but I mean, that could probably be pretty powerful, too. I’m merely asking this: do those around you get more beat up or built up by the hammer that is your words?

It starts, though, with you and I believing encouragement about us first. Say it with me: I am fearfully, wonderfully made, a masterpiece created for purposes God laid out in advance.

The more we believe this and stand in it in confidence, the more others go from competition in a zero-sum game to ones made to be delighted in. Comparison dies and celebration rises when we know we are created well, redeemed fully, and chosen constantly in Christ. And suddenly, it becomes this beautiful thing, an incredible privilege, to look into the eyes of another weary traveler, smile as you see divine reflection in them, and say, “you too.”
Posted by Shelly at 7:11 PM