Maybe it's just because I'm a girl, but I adore the resurrection accounts.  You may not see the connection initially, but it's there. 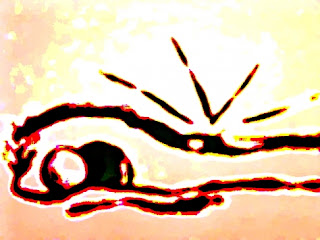 Mark 16 tells the story...
When the Sabbath was over, Mary Magdalene, Mary the mother of James, and Salome bought spices so that they might go to anoint Jesus’ body.  Very early on the first day of the week, just after sunrise, they were on their way to the tomb  and they asked each other, “Who will roll the stone away from the entrance of the tomb?”
But when they looked up, they saw that the stone, which was very large, had been rolled away.  As they entered the tomb, they saw a young man dressed in a white robe sitting on the right side, and they were alarmed.

I've written about this story before, but it's been on my mind lately.  Well, really one aspect of the story.  The stone.

Mary, Mary, and Salome wake up early.  They stir getting spices ready so that they can leave for Jesus' tomb as soon as Sabbath breaks.  I can just imagine them walking quietly together; still pondering all that had transpired in the past few days.  Their Lord and friend was dead.  All they knew to do now was honor him by anointing His body.  Details are unclear in the fog of grief.  It hadn't occurred to them how this would all happen until it hits them, "who will roll the stone away?"  Yet they continued on their journey to honor Jesus, only to find the original rolling stone no longer blocking the tomb.

The thing I love about these women, though, is that they kept walking.  They didn't stop and wait for someone or something to come along that could move the stone.  They didn't turn around and go back reassuring themselves that they had good intentions of honoring Jesus.  They didn't do what I would've done, which in such an emotional state as it was, sit on the side of the road and have an emotional breakdown.  They didn't do any of these things.  They pressed on, just wanting to be near their Lord and trusting that somehow they could honor Him.

I don't have to tell you that there are stones in life.  Boy, are there stones!  As I look at this story, I think of all the looming stones in my life.  I think of the other people walking with me and the stones that they face.  Nobody knows how they're going to get moved.  Some you just kind of play by ear with a fair amount of certainty that they'll just go away.  Others are absolutely terrifying and so large in size that you're powerless to budge them.  I think satan delights in our stones of life.  He wants us to get all worked up and distracted by the stones that get in the way of our peace, joy, goals, healing, and ultimately our trust in the goodness of who God is among us.  We get so distracted by the stones that we freeze in our tracks, forgetting who our God is and that He gives us all good things.  We get so sidetracked with the stones of life that we don't realize they've been rolled back to reveal an empty space.  We're so focused on the stones that we carry on as if they still block the tombs of our world.

The women walked on uncertain of how it would work, only to find salvation and freedom.  That tomb and all others that loom about us were opened that morning.  As Tomlin says, "Jesus has overcome and the grave is overwhelmed."  God is so much bigger than the stone in our way.  Keep walking while you wait for stones to be moved, wounds to be healed, light to be shined.  Jesus told His friends that He'd rise in three days and sure enough, the stone was removed.  As we're walking into trials, God has given us His promises to trust in.  He's asking us as we are uncertain and fearful about what is coming up in our path, that we trust in His power to do all things and to look out for our good.  Trust that God is who He says He is.  He goes before us.  He rolls away stones away from tombs we didn't even know we had.  God's a stone roller.  In the meantime, keep walking, trusting in the hope and freedom in a stone that's been rolled.
Posted by Shelly at 10:30 PM